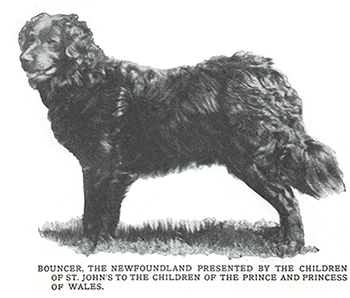 November 9, 1901 - "Bouncer is the Newfoundland presented to T.H.R. the Prince and Princess of Wales on their tour of the Colonies by the children of St John's, Newfoundlands, together with a cart and harness for the little Princes. He is a great favorite with the royal children, who are devoted to him and to whom he is devoted, but he has never been in harness since he was taken on board to come to England. Bouncer is of amiable and affectionate disposition, and extremely well suited by nature to his duties of guardian and companion. The little cart and harness are treasured possessions of little Prince Edward and his brother David, and of their sister the charming little pPrincess Mary, but they are regarded more as curios than as furniture of draught, their young English minds finding it impossible to conceive of a dog being put to any other purpose than those of the gun and sport, where he is not, as is Bouncer, purely a friend and companion of busy as well as idle hours. In their new occupation of learning to ride, the Royal children are becoming familiarised with other traits of animals, and their dispositions, but enchanting as are the ways of ponies, the dog, and notable Bouncer, will always have first place in their affections." 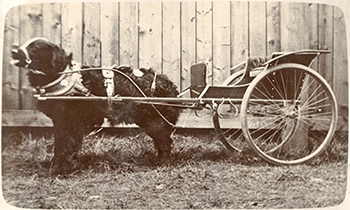 The carriage and harness presented with Bouncer was constructed at the Oke's Carriage Factory in St John. The Oke's were known for their carriage painting, and the detail work in this two-wheel child's carriage is evident. 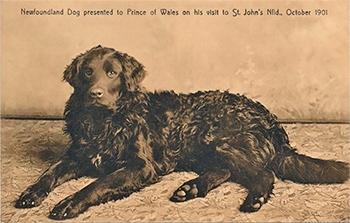 The children of the Colony of Newfoundland subscribed a cent each to purchase the gift. There were 4000 children at the presentation held in the skating rink, St. John's, Newfoundland. The Hon. Harold MacPherson was one of the committee that chose Bouncer for the gift but there is no mention of who bred him. It is said that Sable Chief, the World War One mascot of the Newfoundland Regiment was from the same bloodline as Bouncer. 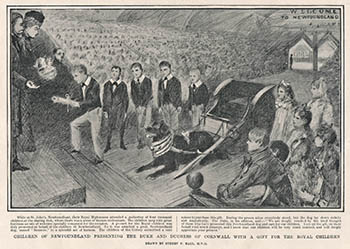 All was not without some bumps in the road however, local news of the day includes this: "A Diasappointment, The Newfoundland dog Bouncer, which with a beautiful little cart and harness was given to the Duke and Duchess at St. John's Newfoundland as a present for their Royal Highnesses' children, has been prohibited from landing at Portsmouth, under the regulations of the Board of Agriculture affecting the importation of dogs." 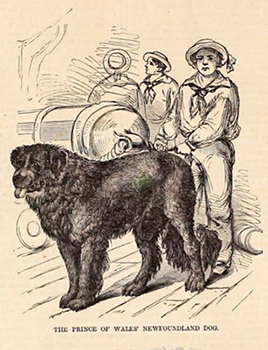 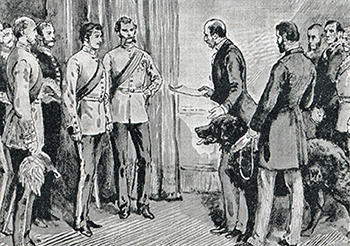 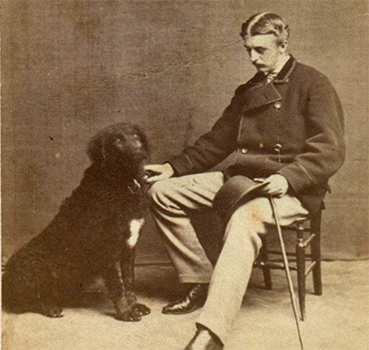 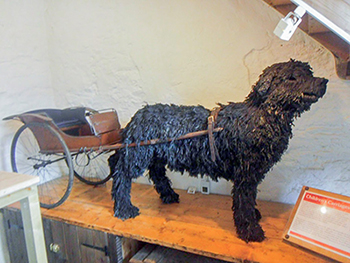 In the present day, the Newfoundland Club in the UK has funded the purchase of a replica of Bouncer created by the contemporary sculptor Dominic Gubb. This very unusual life-like, life-size model is sculptured from used gym climbing ropes, dyed black. The Club negotiated to have Bouncer displayed, in the shafts of the original 1901 Royal Cart, at the Carriage Museum, Arlington Court, Barnstable, Devon, part of the National Trust. As part of the display agreement, if the Royal Cart is ever loaned to another museum or display, Bouncer will always go with the cart.