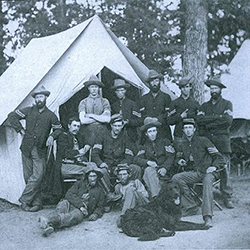 Massachusetts MOLLUS Collection at the Army Military History Institute. It is of Captain Frederick Barton and the NCO's of Co. E, 10th Massachusetts Infantry, taken at Camp Brightwood, Washington DC in August 1861

When Johnny Reb and Billy Yank marched off to war, chances are that a four-footed or winged creature went with them. Wartime animal mascots demonstrated bravery and loyalty, and earned the affections of their human counterparts. Dogs and horses were most commonly mascots for regiments, but a dignified eagle, a lumbering bear, and a sheep also had their place in camp and on the battlefield. Some Civil War mascots were an inspiration for the troops, while others were a reminder of beloved pets at home. Mascots brought loyalty and enthusiasm, and for soldiers, the act of nurturing animals also offset boredom in camp.[1]

Some accounts of Newfoundlands serving as mascots during the civil war include:

"A large dog called "Tony" who was a beautiful Newfoundland Dog lovingly cared for by the Chicago Light Artillery Battery A. He was called the "Battery dog". Tony was a dog of action and gave no thought to the bullets zipping all around him. He was on the battlefields at South Mountain and the wounded at Fort Donelson. He saw action again at Shiloh. He never got separated from his men so when he came up missing at Antietam the worst was feared. Unfortunately, he was killed and found beside the body of W.J. Pollock, Co H. 20th New York Infantry."[2]

The 104th Ohio was truly a group of animal lovers, adopting as their mascots a cat, a tame raccoon, a white bulldog named "Old Harvey" and a Newfoundland. [1]

"On the sixth of October, eighteen hundred and sixty one, as the regiment was on it's way to the seat of war, there came on board the train at Portsmouth, New Hampshire, a large, black, Newfoundland dog, weighing considerably upwards of one hundred pounds. Entering the car occupied by company H, Capt. Emerson, he was adopted by the members of that company and christened "Major." From that time until May eight, eighteen hundred and sixty-three, when the regiment was mustered out of service, he continued a member of this company, (never but once deigning to recognize a person belonging to any other, and that during Banks' retreat from Winchester when he became so crippled from continuous travel that it was with the utmost difficulty he could proceed,) sharing with almost human patience and fortitude all the vissitudes of camp life, with as much sense of duty, apparently, as if he had been duly enlisted and mustered for the war." Major went on to serve with the 29th Maine, where he was killed at the Battle of Mansfield Landing in Louisiana. [3]

In a retelling of the incidents at Pittsburgh Landing (also known as Shiloh) "Private John K. Ferguson, company K, Sixty-fifth Ohio, who was killed in the second day's battle, was accompanied to camp by a young Newfoundland dog, who had persistently followed him from the time of his enlistment, and from camp to camp, to the moment of his death. Two days after the battle the faithful dog was found lying upon the inanimate breast of his master; nor would he consent to leave the spot until the remains were buried."[4]

A history of the famous Iron Brigade, the 6th Wisconsin relates the following from the Battle of Antietam: " At the very farthest point of advance on the turnpike, Captain Werner Von Bachelle, commanding company F, was shot dead. Captain Bachelle was an ex-officer of the French army. Brought up as a soldier in the Napoleonic school, he was imbued with the doctrine of fatalism. His soldierly qualities commanded the respect of all, and his loss was deeply felt in the regiment. Bachelle had a fine Newfoundland dog, which had been trained to perform military salutes and many other remarkable things. In camp, on he march and in the line of battle, this dog was his constant companion. The dog was by his side when he fell. Our line of men left the body when they retreated, but the dog stayed with his dead master, and was found upon the morning of the 19th of September lying dead upon his body. We buried him with his master. So far as we know, no family or friends mourned poor Bachelle, and it is probable that he was joined in death by his most devoted friend on earth." [5][6][7] 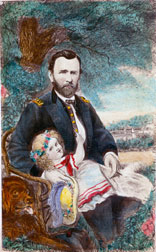 5. A Full Blown Yankee of the Iron Brigade: Service with the Sixth
p. 93 By Rufus R. Dawes Contributor Alan T Nolan
Published 1999
U of Nebraska Press