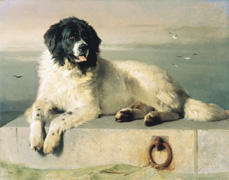 Dated 1831. The most famous of all Landseers. On the painting is Paul Pyr bred by Mr. Phillip Bacon and belonging to Landseer’s cousin. A Stately white dog with a black head and small blaze, waiting to be of assistance to the unwary. The work first exhibited in 1838. The distinguished dog in the painting is supposed to be "Bob" according to legend, he was shipwrecked off the coast of England. As a stray, he became well-known along the London waterfront saving people from drowning, There were twenty-three rescues recorded spanning fourteen years, He was declared a distinguished member of the Royal Humane Society which not only entitled him to a medal, but also to food every day.

When Sir Edwin Landseer decided to paint Bob in 1837, the dog could not be located. Another Newfoundland, whom Landseer had seen walking down a street in London carrying a message for his mistress, posed for the painting. His name was Paul Pry. Paul Pry was taken to the artist's studio and placed on a table in the position that we see him in the picture, The artist has placed the faithful dog against a simple background; a dull threatening sky, The light falls beautifully on his white coat. We can almost feel his thick, soft fur and hear him breathe, His dark head stands out against the lightest part of the sky, Sea gulls are flying about. The water laps against the stone block where the iron ring is fastened, The picture is quiet, but there is a feeling that something is about to happen, should there be a cry for help, Bob would be off to save! 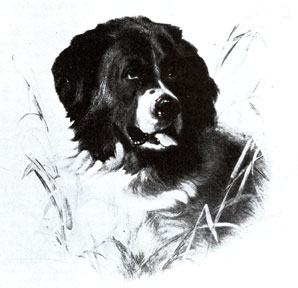 The original painting of Bob is on long-term loan from the Tate to the Kennel Club in London, it was originally hung there as part of the "Pets and Prize Winners" exhibition in 2009 and was also displayed there as part of "The Newfoundland: An Exhibition of Art and History Portraying this Noble, Loyal Breed" in 2013. An engraving of this painting was made by Thomas Landseer with extensive retouching by Sir Edwin to assure perfection.

The "Distinguished Member of the Humane Society" painted by Sir Edwin Landseer in 1838 and damaged in a flood later that century was restored and placed on display at the Philadelphia Museum of Art. To complete NCA's obligation to the Tate Museum, the painting was returned after four years to England. By purchasing one or more of items below you can help NCA with funding the costs of the resoration and exhibition. Limited-edition posters, print size is 15.5” x 20”, $20.00 plus $3.03 shipping (US) or a pack of 6 cards, 4” x 5”, $10.00 plus $1.14 shipping (US). Cards are blank inside. Contact: Sue Miller, distinguishedmember@ncadogs.org Check or Money orders made out to: NCA DISTINGUISHED MEMBER Send to: Sue Miller 282 E Valcourt Rd Grove City, PA 16127 For orders outside the USA, contact Sue for shipping charges 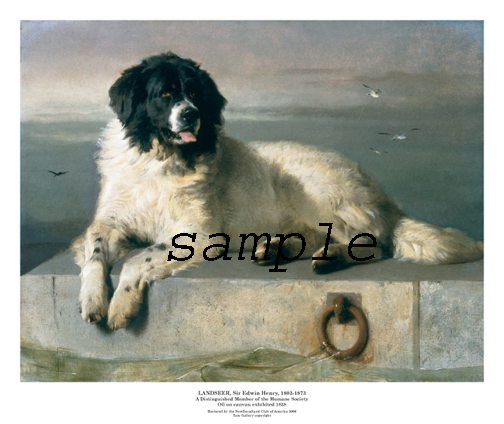