This article was originally printed in the Fall 1981 issue of Newf Tide. Written by Eva Chapman, it remains interesting yet today.

Sir Edwin Landseer is the artist credited with making a powerful influence on the Newfoundland breed. Although it has been said that he painted the white-and-blacks because their coloring made a brighter picture, he is honored by having that variety named the Landseer Newfoundland. His paintings not only helped popularize the breed, but created a fashion in that time for the white-and-blacks.

Landseer’s father was a writer and lecturer on art subjects. He was also a well-known etcher and engraver to the King. Part of Landseer’s popularity was due to the fact that his brothers, as expert engravers, made many copies of his works, and thus it was possible for people of small means to afford them. It was a poor English household that did not have a copy of Landseer’s pictures on its walls. Many Americans can recall, with nostalgia, their first acquaintance with the reproductions of Landseer’s paintings as they were favorites with printmakers in America.

The life of Sir Edwin Landseer has a special charm and story fascination. Here is an artist who found his greatest interest in animals, which he made the subject of most of his pictures.

He was born in London in 1802. His father encouraged his art inclinations and spent much time with him. They took frequent walks into the fields, where they could talk about the things that they saw and make sketches of them.

When Landseer was only 11 years old, he was awarded a prize by the Society of Arts for the best drawing of animals. Before he was 12 years of age, he could paint in water colors and oil. These early sketches are now preserved in South Kensington Museum, London. At the age of 13, two of his oil paintings were hung in the Royal Academy Exhibition in London. His picture of a pointer bitch and puppy won the acclaim of the judges for being the first dog pictures since the time of Hogarth to show individuality and character. This recognition greatly encouraged the boy.

As he grew older, wherever he could find animals, there he went. He studied the drawings of Raphael, and the Elgin marbles, which had recently been brought to England. He went to the forests and zoos to find live animals. He also did illustrations for children’s books. All this study gave strength to his talent.

Landseer’s formal art training began when he entered the Academy at 15 years of age. Possessing a charming appearance and a lovable disposition, he won the hearts of everyone. The president of the Academy even call him his "little dog boy."

In 1824, Landseer visited Sir Walter Scott at Abbotsford, and made many pictures of the poet and his dog. It was this trip to Scotland that engaged Landseer’s interest in the deer. The mountain and lake scenery impressed the artist so greatly that he travelled often in that country, thereafter.

Landseer, as a conversationalist, was brilliant, humorous, and dramatic. He delighted in social life. When he opened his studio and home at No. 1 St. John’s Wood Road, it became a popular gathering place. Here the world came to enjoy "one of the most charming of studios" and the company and talent of one of England’s most sought-after artists. As the nobility had come to the studio of Sir Joshua Reynolds to have their portraits painted, so this generation sought Sir Edwin, to have portraits made of themselves, or to have their fine dogs immortalized by his brush.

Among his greatest admirers was Queen Victoria and Prince Albert. Landseer was often their guest, painting their animals, and teaching both the Queen and her husband the fascinating art of etching. From Queen Victoria, in 1850, he received the honor of knighthood. In the year 1865, he was elected President of the Royal Academy, but his health and his powers were failing, so he declined the honor offered him. He was feeling sadly that he had outlived his greatness; hand and brain were growing alike feeble, and he had times of melancholy and nervous distress, when he would shut himself up from the society of his dearest friends. One more great triumph remained to him—the completion of the grand lions in Trafalgar Square, placed in position in 1867, and six years later the weary painter went to his rest. He was mourned both in England and America. 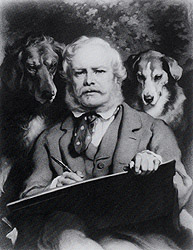 Landseer’s great success and popularity are due almost entirely to his portrayals of dogs, though among his pictures are paintings of many other animals. He handled his subjects with great dramatic power, using a simple directness and a poetic, imaginative quality in his interpretation of animal life. He had a clever technique with his brush and achieved a remarkable skill in rendering textures.

Perhaps few pictures are so well-known to us, by engraving and photograph, as those of Sir Edwin Landseer. They will always be loved by those who respond to the friendliness of animals.

Surely, when Sir Edwin Landseer was laid to rest in the crypt of St. Paul’s, there must have been many a loving dog-friend left to miss the voice and hand of the painter who had won their hearts.