When a researcher sets out to find the history of a certain breed of dog, the world is wide open - more or less. Patient searching will usually find the material in paintings, photographs, engravings, etc., as well as in written material. In my article of Newf Tide (Vol. 7, No.4: Winter, 1976) concerning the Landseer Newfoundland, the major problem was which of the scores of examples of that black and white dog to use.

The case of the orderly progression of the black Newfoundland is considerably more confused. I admit to a bias: black Newfies are my first love, so there had to be another side to the story - only a rainbow has one side, and the pot at the end of it is gold. not black! The beautiful blacks of the second half of the 1800's did not spring full-blown like Athena from the head of Zeus: inspired breeding and careful standards must have accounted for such magnificent specimens as that of William Coat's "Leo", 1872 (Drury, p. 29) and many others of that period you can name.

The serious historian searching the origin and development of our modern black Newfoundland cannot be content with collecting "Histories of Dogs", looking in the Index under "n" for Newfoundland, and taking what is found there as gospel, as one of our more popular monthlies (Dog World: May, July, November, 1977) is doing. These "Histories" cannot be ignored, of course, and there is a very persuasive weight to the printed statement. And, in too many cases, they "borrowed" material and illustrations from each other, to the extent that the best material is to be found elsewhere - in original sources. There is a good deal of tangled seaweed to be cleared away from the history of our black breed before we can even begin.

The difficulties of clarification fall into a number of categories:


I. Emotional judgment based on insufficient information.

II. Decisions made on supposition - ignoring dating of statement or picture. 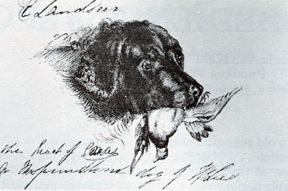 I. Five years ago I found a drawing by Sir Edwin Landseer (Fig. 1) duly signed and noted in his own crabbed handwriting "The Head of Caesar, a Newfoundland Dog of Wm Lee". Where's the rest of Caesar - gone with his legions? Behind that vibrant head he could be almost any color or pattern. Drawings are usually made as notes for future paintings: so far I have not found a painting including this dog. Obviously he is a retriever. The bird he carries is tentatively identified by Prof. Robert Storer of the University of Michigan Dept. of Ecology & Evolutionary Biology, as a "Lapwing", mainly because of the broad wings, distinctive markings on the tail and dark throat with lighter breast. The lapwing is a fairly small game bird - it would appear that Caesar is not a huge dog. But he is labeled a "Newfoundland" and the drawing is dated 1852 (W. Cosmic Monk-house, The Works of Sir Edwin Landseer, Fig. 86, p. 128. It tempting to assume that Caesar is an all-black Newf, and indeed he may be, but this would be an emotional judgment, not based on sufficient information.

II. Adding to the confusion of the development of the black Newf as we know him today, are statements made by knowledgeable authorities on the basis of pictorial evidence, without reference to the date and historical accuracy of the painter himself. To say that "Leutze's painting of George Washington in New Jersey shows a large black dog disappearing into the shrubbery" (AKC Gazette, K. Drury, "The Newfoundland", Aug. '76, p.63), intimates, without actually saying so, that that large black dog is a Newfoundland and that it existed in George Washington's time. The painting however, was done by German-born Emanuel Gottlieb Louts who was not even alive in Washington's time. The Dusseldorf school of painting in which he was trained, was noted for its realistic painting, but not necessarily for its absolute authenticity of detail. Leutze's most famous painting, "Washington Crossing the Delaware" was painted in Dusseldorf in 1851; the General's costume is authentic but the flag carried by the soldier behind him was not composed until 50 years later. And practical seamen have had a good many salty things to say about the improbability of Washington's being able to maintain that heroic stance in an over-crowded boat in treacherous, ice-bound water. All we can really say about the New Jersey painting is an unusually modest, large black dog existed (probably in Dusseldorf) in 1851.
The above explanation may be over-long. My apologies if it is, but the point to be emphasized is that the presence of a dog in a mid-19th century painting does not prove that dog's existence in the third quarter of the 18th century. Even if it was black Newf. 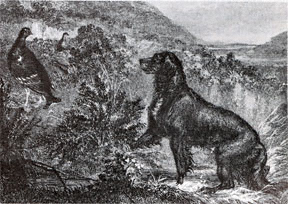 Figure 2: From a painting by F.C.Turner. By Courtesy of Beinecke Rare Book & Manuscript Library, Yale University

III. Which brings us to one of the most puzzling problems I have met in more than a quarter-century of art-history research. Fig. 2 is an illustration from the Yale Univ. Beinecke Library's copy of Annals of Sporting (Vol. 3, 1823, facing p. 72). The description is titled "Fan, a celebrated Half-bred Bitch. Fan is a cross between the beagle and the terrier and is proof of the superiority of this species of half-breeds over the usual bull-and-terrier products." Now if this dog is a cross between a beagle and a terrier, I'll eat my dunce cup. Surely this dark beauty is an early dark (black, I hope) Newfoundland? Surely the resemblance between this dog and Reinagle's well-known "Newfoundland Dog" (Fig. 3, Sportsman's cabinet, London, 1803) is unmistakable? The dog is standing in a stream of water, which can't surprise many Newf owners. And he's facing a male grouse, identified by his lyre-shaped tail and white wing-bars. The mature grouse is approximately 21" high, which makes "Fan" a very large dog indeed. The painting was originally done by a now quite forgotten painter, identified in the lower left corner "F.C. Turner". (F.C. is not the famous Turner, he was J.M.W.) But F.C. did exist, 1795-c. 1846, according to E. Benezoit's French Dictionary of Painters & Engravers, and was, in his time, a rather prolific British painter of sporting scenes. Sporting painters such as F.C. were rather like the news photographers of today rather than the more fashionable painters such as George Stubbs and Edwin Landseer. F.C. Turner has not (yet) become a "collector's item." 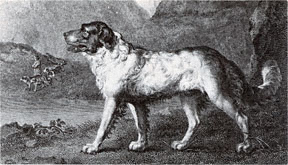 With all due respect to both beagles and terriers, no possible combination of these two could produce "Fan". The problem is solved when I finally acquired my own 13 volumes of Annals of Sporting, in which "Fan" is Fig. 4, engraved from a painting of J. Webb, and is colored "terrier's tan." This original had been removed sometime between 1823 and the time the Yale copy was rebound. In my copy the covers are mouldering, but the spine is untouched. The foregoing detective story mayor may not be of interest to you, but I emphasize it mainly to insist that this is not an isolated example. The substitution was doubtless unintentional. But many were not. 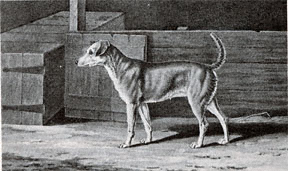 IV. Publishers of engravings were some of the worst offenders. Engravings of Sir Edwin's as well as those of many other painters were enormously popular in the mid-nineteenth century. So an enterprising publisher brought out a set of three: "My Horse", "My Wife" and "My Dog". Obviously Sir Edwin had a horse - there was no alternative in 1842. But the "My Horse" of the series is an engraved detail from the painting "Return from Hawking" and "My Horse" belonged to Lord Francis Egerton, afterwards Earl of Ellesmere. But a wife? No. Illicit relations from time to time? Maybe. But the engraving titled "My Wife" is a portrait of Miss Power, a niece of Lady Blessington. Miss Power, a lovely young Victorian lady, often served as Landseer's model, but NEVER as his legal wife. "My Dog" ? Compare that endlessly reproduced lovely dog's head (Drury, p.60) with that of "A Distinguished Member of the Humane Society" (Drury, p.52). Same dog, same pose, only the stalks of grain have been added. Sir Edwin's dog? No. The subject of "Distinguished Member" was Paul Pry, bred by Philip Bacon, Esq. and was never owned by Landseer.

In our search for early Newfoundland dogs, a major point we've over-looked, I believe, is that until about 125 years ago, most dogs were bred primarily for specific purposes: coursing, fighting, herding, retrieving, etc. Not content with this, breeders specialized within the groups: Dinmont Dandies for hunting the rabbit, dachshunds for the badger, fox hounds, stag-hounds, otter hounds, etc. Even knowledgeable sporting men of the early 19th century were confused about the names for dogs, cross-bred and inter-bred. Some of them and some up to contemporary times, were of the opinion the breeders should have left well enough alone. But they didn't. One example: An exhibition of paintings in the Royal Academy was reviewed in 1822 as follows: "Concerning a painting by J.F. Lewis, An Old Newfoundland Dog, that is a Black Mastiff (italics theirs) but it is well-painted, notwithstanding this error."

I do not mean that beauty of form, gait, color and coat were ignored in breeding, but showing for breed alone is a comparatively recent phenomenon. AKC Field Representative Bob Bartel made this most excellent point in a recent issue of Time Magazine, (Sept. 5, 1977, p.72) "What has happened with many breeds is that two separate strains of genetic pools have evolved - good-lookers vs. good-workers. Seldom did the twain meet. .. " The developing interest in dogs that do well and also look well might make the pre 1850 attitudes more understandable. Giving just two examples of what I'm certain are many: Claire Carr's Am Can Ch Shipway's Knight Patrol has also earned titles of UDT many times over, and most recently, the coveted WRD, the highest Water Dog Title. And Kilyka's Betty McDonnell's Am Ch Dryad's Lord Nelson won his UDT at an early age; not to forget the distaff side, some of her Champion bitches not only won UDT's but produced litters of Champions besides.

Having stated some of the pitfalls of a too-eager search, I must confess I have found very few paintings of the all-black Newfoundland in the early half of the 1800's. None, at least, which I could certainly verify. But there are many too black to be Landseers, or have too much white to be the current standard of black Newfs. Significantly, most are found in "working scenes" - on the field, in the barnyard, running with children and ponies, etc., such as that of Fig. 5. The "almost blacks" were there, ready to emerge when fashion dictated the all-black. And when Dog Breed Standard Groups of all concerned countries took their courage in both hands and dictated the points of the ideal Black or the ideal Landseer. 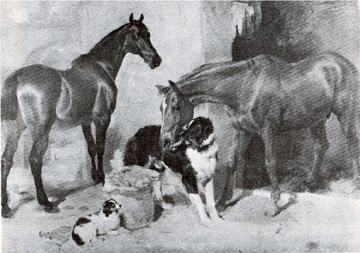 Figure 5: Landseer's "Horses and Dog with a Carrot" 1827, Courtesy of Christies of London, Photo by A.C. Coooper, Ltd.