What Color is a Newfoundland and When? - Emma H. Mellencamp PhD. History of Art '57

A rumor has been going around for more than a century that the black Newfoundland dog was very popular in the late 18th and early 19th centuries until Sir Edwin Landseer's "Distinguished Member of the Humane Society" painted in 1838, made the black and white Newfoundland the "In" dog to have. In four years of intensive research on Edwin Landseer and his contemporary painters of animals, the breed called "Newfoundland", I have found, were not black and the painting of "Distinguished Member" had no effect upon the color of the breed whatsoever.

C. Bede Maxwell reproduced in color (1972) a pair of Newfoundlands in a painting dated 1800: the male was black and white and the bitch yellow and white. Reinagle's much published "The Newfoundland Dog" (Drury, p. 47 and Chern, 2nd ed. p 33) was first published in a magnificent edition of 1803 (Wm Taplin) in which it is clear that those dark areas on the dog which seem to be black were tawny yellow, his muzzle a steel-blue.

In fact, all the early 19th century illustrations which I have found, and whose color I could authenticate were white with black or dark areas and frecklings. Not a single all-black was called a Newfoundland. One of the handsomest of these is P.E. Stroehling's "Duchess of York" (Fig. 1, detail) painted in 1807. It's true the dog does not have as handsome a coat or the magnificent feathering of that 1976 sensation "Topmast's Pied Piper" but the pictured dog was bred some 175 years ago.

Fig. 1- Duchess of York (detail) P.E. Stroehling 1807. Reproduced by permission of Her Gracious Majesty, the Queen, copyright reserved to the crown.

Sir Edwin made several portrayals of the black and white Newfoundland dog before the one pictured here (Fig. 2), painted in 1842. I don't think his stance would get by even in an Unsanctioned Fun Match, but the artist was only 22 at the time and even the most precious of artists must have a formative period. Landseer's mature paintings show an almost photographic realism and an understanding of many breeds of dogs both in action and repose.

Our Fig. 2 is called "Lion, a Dog" which title is helpful since Sir Edwin painted also magnificent real lions and did the life-sized models for the bronze lions at the base of the Nelson monument in Trafalgar Square in London. The "Lion" in the Victoria and Albert Museum is, as are most Landseer paintings everywhere, in storage. One climbs several enormous flights of marble stairs to the attic. The Museum attendant was even older than I; we climbed very slowly to the attic. "Lion" is hanging high on the wall. Luckily, there is a flight of iron steps opposite so that one can see the painting at eye level and luckily also, it is an enormous one - 591/2 X 771/4 inches. I saw it on a (rare) clear day with light streaming into the attic through a window on the same level as the painting. He is white with black markings and much handsomer than the photograph indicates. He was a quite famous dog in his time; many historians chronicle stories about him, describing him as "a splendid fellow powerful as he was good tempered, but he would not submit to insult." 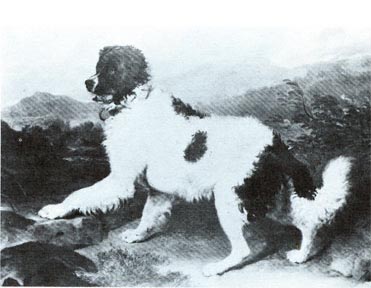 There are many lost Landseer painted treasures out there, somewhere. Sir Edwin was incredibly prolific, painted almost continuously for over 50 years, sometimes two different pictures, one with each hand at the same time. It was a parlor trick, of course, but he was a deft technician. The Graves' catalog lists over 500 major works and it is not altogether complete. His most recent biographer, Cambell Lennie (1976) reports that "the sale of Landseer's works of art, some 1,400 of them took place over seven days ... beginning 8th May 1874 at Christie's ... " Yet anyone who has tried to find information about Sir Edwin's and his contemporaries' paintings has met with exasperating obstacles. The 19th century major biographies of Sir Edwin are in storage and/or crumbling into confetti. A search for his actual paintings is even worse: the British Museums have only several dozen among them, all but a few in storage. Many of our American museums, tired of storing Landseer's and other 19th century realistic paintings and enormous engravings, have sold them at auction. And when they have been retained, it takes perseverance, pull and patience to get them out to view. The engravings of Newfoundland dogs, both Sir Edwin's and his contemporaries, are more readily available, reproduced smaller in books, but they are, of necessity, black, gray and white. When searching for color, only the paintings themselves, or color descriptions by contemporaries, will do.

It's easy to fall into the error that a black dog in an engraving is indeed a black dog. I found an engraving of "Ptarmigan Hill" painted by Landseer in 1869, showing two shaggy black beauties I was quite certain must be early Newfs, until a color heliotype of the painting published in 1876 showed them to be a grayed violet-blue which was described as "liver-colored", and the dogs themselves identified as "retrievers."

Only a researcher in the field can know the deep satisfaction of finding a drawing or a painting of a dog, not only definitely dated but also described by 19th century viewers as a "Newfoundland." 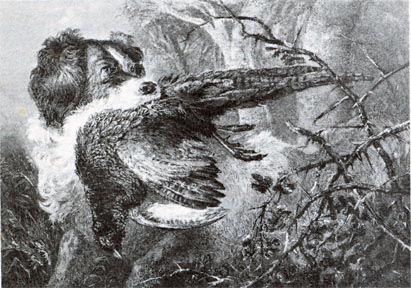 Fig. 3 is a drawing by Sir Edwin for Annals of Sporting, 1827, showing not only that the artist had progressed in his technical ability, but also that the black and white was the dog the British called "Newfoundland." The accompanying text:

The sense of smelling exhibited by the Newfoundland dog almost exceeds credibility; hence the value of the animal in finding wounded game of every description. "Their discrimination of scent" says Col. Hawker" in following a wounded pheasant through a furze brake, or warren of rabbits appears almost impossible." For covert shooting where strength, scent and courage are absolutely indispensable, the Newfoundland dog as a retriever has no equal ... Annals of Sporting, Vol. 11, p. 131.

Vero Shaw, in his Illustrated Book of the Dog (1890) says that Landseer "corrupted the public mind upon the subject of the Newfoundland. A vast number of people, without troubling themselves to inquire into the matter, have associated the black & white dog with the correct type of Newfoundland, utterly regardless of the fact that Sir Edwin may have selected this color as brighter and more suitable for the object he had in view." Shaw, possibly also without "troubling himself to inquire into the matter" copied this thought from Stonehenge (J.H. Walsh) in his 3rd ed. of 1878. The opinion continues to be repeated endlessly into our own times.

Both dog historians have themselves not troubled "to inquire into the matter" that Sir Edwin could and did produce a large number of black animals, magnificently recreated in paint during his mature period: Prince Albert's stunning black "Eos", a greyhound, "Dash", the Duchess of Beaufort's coal-black spaniel, and "Flora", a silky-black spaniel in "Prince George’s Favorites". The latter includes an all-white pony named "Selim" and a black & white Newfoundland named "Nelson." It is true all of these were so-to-speak "portraits" commissioned by the nobility. But Sir Edwin also painted black dogs by his own choice: "Two Dogs Setting a Hare" one very black and the other white with dark freckling. "Jack in Office" includes two all-black dogs. "Laying Down the Law" has two black dogs in the group surrounding the amusing white poodle "Judge."

The paintings cited above are only a very small sampling of the black dogs Sir Edwin produced. He was a master painter and would not have stooped to change the color of his dogs to suit "the object he had in view". He changed the background to suit the actual color of his dogs. Even in his early painting, note that in "Lion" the white area of the dog is against a dark background, while the dark head is silhouetted against the light sky: Let us hope that this evidence will lay to rest the misconception that Sir Edwin painted black & white dogs because he was unwilling or unable to paint an all black.

Sadly enough, Stonehenge in his first edition of 1865 was writing at a time when it was fashionable to downgrade Sir Edwin who was rapidly falling from the position of most sought-after animal painter of his time, into ill-health, alcoholism, periods of insanity and death in 1873. "Few painters" says Campbell Lennie "are remembered more for their execrations and less for their excellencies than Sir Edwin Landseer." Sir Edwin's Newfoundlands, to whom he gave the name "Landseer" decades after his own death, were black and white. The black Newfoundland began to gain prominence during the last several decades of the 19th century. But were all of those black engravings of Newfoundlands really black? Surprisingly enough, I have at this writing, a color photograph of a dog called a Newfoundland by 19th century catalogers, the original painting of which I have seen, but whose color no one of the later 20th century would believe.

Did you notice that in the last issue of NEWF TIDE, Vol. 7, No.3, that the black & white dog in "Old Newf Tales" was called a "Newfoundland" and that the book was published in 1872? I can vouch for its authenticity, I submitted it. And of all five stories about Newfoundlands, which were illustrated therein, all were black & white.

Now that color has become a compelling issue among. breeders of the Newfoundland dog, may I suggest that a look backward, with definitely dated pictures, plus contemporary documentation, may give a key to the present and the future of our breed? As an art historian of more than 35 years, I can assure you there will be surprises. After all, if the 20th century Labrador dog is a "kissing cousin" of the contemporary black Newfs, what is the origin of the increasingly popular yellow Labrador?