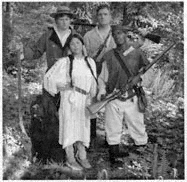 In March 2003, I received a phone call from a man named Dennis Burkhart. He said he was producing a film on the Lewis and Clark expedition as seen through Sacagawea's eye's. He needed a Newfoundland for the part of Seaman and asked if I had a dog Ithought could handle the part? Of course! Roan has never let me down, no matter what I have asked of him. The part didn't sound too hard~nothing we haven't covered in basic obedience.

The producer's daughter (about 11 years-old) was one of the first people to greet me. "The dog is here, Seaman is here!" I then met Dennis in person and he introduced me to Rolf Forsberg, the director. Rolf had not seen a Newf in person before, but he loved Roan. There was a big tent, the inside transformed into a log fort. This was where the first scene was shot. Captain Lewis was seated at his desk. Roan was to lay under the desk and Lewis was to reach down and pet him. The director sat at a table with electronic equipment. Cameramen, lighting people, and assistants seemed to be everywhere. Roan laid down on a long stay. "Have him look up, more to the left! The log behind him is hot!" said the director. The director's attention to detail was amazing. The scene was shot and Roan was perfect. The main thing that happened on the set was waiting: for your scene and for make-up and wardrobe. Roan's make-up was easy, a quick run through our pasture before heading to the set and he was ready to go!

Roan's other scenes were outside. He hunted with Lewis, Clark and York for game. The area we filmed in was very wooded and hilly. They wanted Roan to come from behind the group and lead them up the trail as if he had caught the scent of an animal. In another scene he walked along the trail with Lewis and Clark as they neared the ocean. In the Corps of Discovery scene he had to walk in a procession that included people and horses. Only one scene had to be re-shot because of Roan, and that was my fault. I could not hear the director and I sent him up the trail too early. The only thing Roan got upset about during filming were the powder muskets going off. I don't know why. He is usually fine with gunshots-maybe the sulfur smell?

In August there was a preview of the film for the cast and invited guests and the film looked great! It is geared towards grades three through eight. The director has since told me that he would like to do another film on the Lewis and Clark expedition from Seaman's point of view. That film will be a lot more involved for Roan, but I know he can do it.