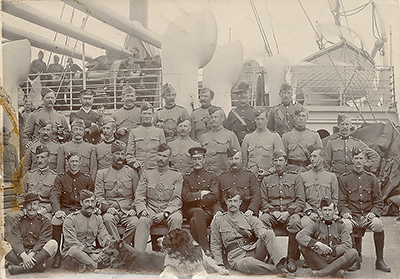 Nelson, a Newfoundland Dog, and his owner, Private Arthur Edge, of the first South Australia Contingent to the Boer War, sailed for South Africa on November 2, 1899, where Nelson served as the regimental mascot.

The dog saw some heavy fighting and was captured by the Boers on February 13, 1900 and was held as a prisoner of war. He escaped on March 5th and was making his way back to his unit near Colesburgin the Cape Colony when two Australian soldiers came upon him and they escorted him back to his company where his comrades in arms gave him a great cheer 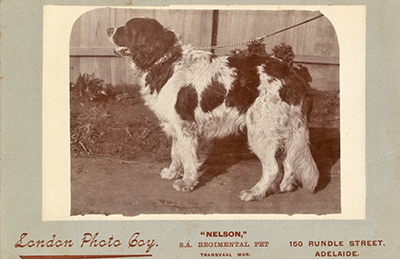 When the unit reach De Aar they were offered fifty pounds for Nelson, a very large sum in those days, but no amount of money would get them to part with him.

When his unit returned home Nelson was with them but he had to endure a spell in quarantine before he was let loose back in Australia. It is believed he was the only animal allowed to return to the country from South Africa. 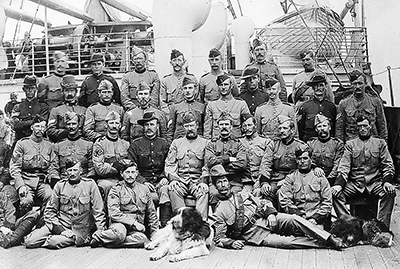 The now famous Nelson was then used in the fund campaign to raise funds for the South Australian Boer War Memorial. While he was not awarded a medal for his service in the Boer War, he did have his picture, oil on canvas, painted by Adelaide artist Winifred Kelly using a Boer War period bell tent as a background. The picture is now in the Australian War Memorial

Lance-Corporal W Rust, a member of the first South Australian Transvaal contingent, wrote: 'Nelson has been in the thickest of the fighting, and has also experienced the novelty of being a prisoner of war in the hands of the Boers. He was captured on 13 February, but on 5 March escaped. We were on the tramp when he returned. McWilliams, of the West Australians, and our Sergeant Laycock found him returning in the direction of Colesberg, and escorted him back to the company. Needless to relate, Nelson received an ovation from his 'comrades-in-arms'. We have learnt to love the noble animal, and his absence put a dampener on us all. Our company was offered 50 pounds for Nelson at De Aar, but as money would not buy him, the liberal offer was politely refused. The Colesberg people said the Boers held our pet as a great prize, and decorated him with the colors of the Orange Free State, but he discarded their old rag for the dear old Union Jack. He richly deserves a war medal after displaying such intense loyalty to England'. - from the Australian War Memorial 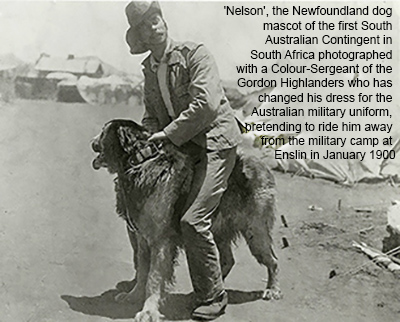 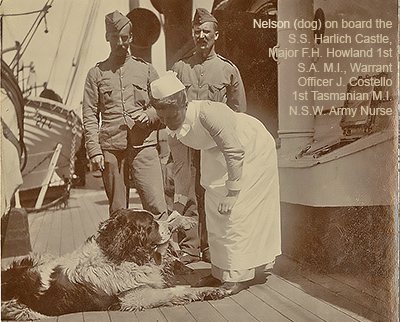