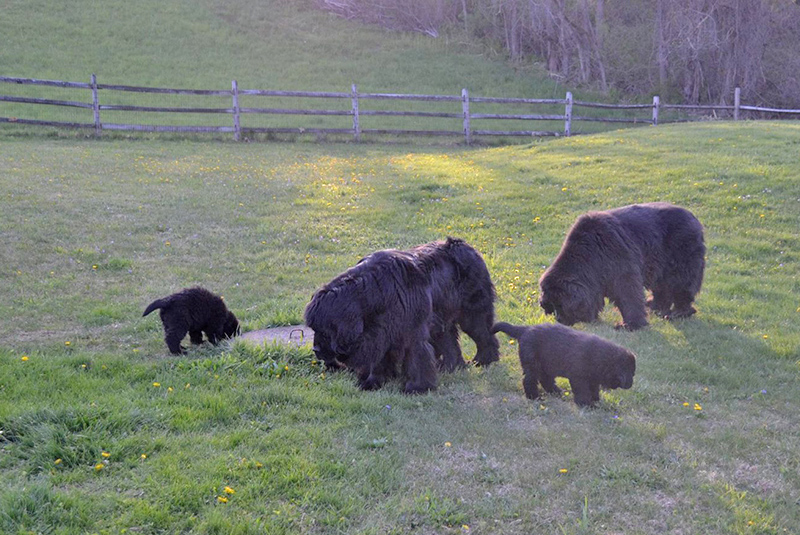 The Newfoundland Club of America Registry of Merit (ROM) system was designed to honor those Newfoundlands who have proven themselves to be exceptional producers of Champions and Working dogs.

What is a ROM?

A ROM is a Newfoundland that has been admitted to the Newfoundland Club of America's Register of Merit for producing multiple ROMs, Champions, and performance (suffix) titled offspring.

A sire requires 12 points to earn this recognition, and six points are required for a dam.  A dog must have sired a minimum of 10 Champion and/or ROM progeny, plus two additional titles. These titles can be additional ROMs or Champions, or any performance title. A bitch must have a produced a minimum of five ROMs and/or Champions, plus one additional title – a ROM, a Champion, or any performance title.

There is no minimum requirement for working titlists. ROM status may be achieved exclusively from ROM and Champion titled offspring.

ROM points that are earned by a dog or a bitch are cumulative, and the time frame in which the titles are earned and the order in which they were earned is immaterial. As offspring continue to earn titles, ROM points will be added to the official ROM point totals for each parent within the constraints of the 5:1 limitation.

The NCA Register of Merit system was initially approved April 3, 1986. The criteria were enacted so that dogs would become ROMs retroactively to the beginning of Newfoundland record-keeping, and a total of 100 ROMs were honored at that time. A complete explanation of the ROM system, a listing of the titled offspring for each of the initial 100 ROMs as well as the overall standings for ROM dogs and bitches appeared in the Winter 1986 issue of Newf Tide (Volume 17, Number 4) – Flip (Bowser) Young