The following article was written by' Norman Hodge of England, for the Nova Scotia Newsletter some time ago and I'm sure some of our new members would like to read it as well.

Lord Dudley loved his Newfoundland dog. A great opening line for a ballad. And true, too. In 1831 Lord Dudley first contacted Matthew Coates Wyatt, certainly the most popular sculptor of his time, and asked him to create a statue of "Bashaw", most loyal and faithful Newfoundland dog. Wyatt had no objections: especially since the commission expressly asked for not just a mere likeness but for a work of art and "damn the costs, sir!!! Wyatt did. White, black and grey marble: rubies, topaz, sardonyx and on and on. The fee: a modest 5000 guineas (13,500 today). One problem. By this time Lord Dudley was dead - in 1833 - and, understandably, Bashaw himself was in no position to assess the value of his statue, concerned as he was with the problems and joys of an early retirement to a country estate. And Wyatt's bill is still outstanding: a lesson to future Newf artists to seek payment in advance. 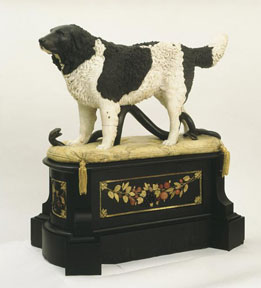 "Bashaw" now stands in one of the myriad small rooms of the Victoria and Albert Museum which are dedicated to a preservation of mid-century memorabilia. He is in the centre of the walkway: on one side is a collection of 19th century silversmithing: on the other side a potpourri of tastes in furniture: further down the hall monstrous centerpieces, four feet in diameter, compete with coffee tables supported by the beaks of carved wooden storks and knickknacks of mind-bending intricacy. After a while, the tummy hurts. And snakes everywhere! Not real ones, silly, Copper snakes and wooden snakes and china snakes and silver snakes ... well, anyway, the Victorians seem to have this thing about snakes, undoubtedly related to the wonders of the Empire and to morality as well. A snake a day keeps paradise away, sort of.

The marble dog attracts a lot of attention. He can't be ignored. In an hour of contemplation and picture taking, I counted almost 100 people who stopped to investigate this attractive-repellent sculpture. The general reaction was puzzled amusement. The weird, wonderful world of wacked-out victorianism. Too much. And on they passed.

Attractive-repellent. From a distance almost life-like, dark eyes gazing into the distance, paws firmly planted, tail erect, coal-black head and saddle and rump, in stark contrast to the cream whiteness of the rest, his right front paw pressing down on a ruby-eyed writhing boa-constrictor, the faint-yellow marble pillow on which he stands pressed down with the illusion of weight. Closer up one sees the body is a mass of carved marble curls, only the face and legs are smooth. The full size statue rests on a black polished marble base, rather simply decorated with a Florentine mosaic depicting an arching strand of ripe fruits in naturalistic colours. And then, a touch. The marble is cold ... frigid ... solid: and the illusion is broken: non-warm, non-yielding, non-Newf. Attractive-repellent. One doesn't touch it again.

The illusion of naturalism only: satisfying the original request for both a reproduction of the living, breathing animal and for a work of art. "Bashaw" communicates even with his tale frozen in a rigid pose. The first thing one notes is a deliberate harmony based on the curved- line principle. Wyatt's original plan was for a sitting Newf but Lord Dudley wanted a standing likeness. And he got one with paralleled curved lines in sequence, both on a horizontal and vertical plane: except for the right rear leg pulled' back, the legs have a forward-sweeping curve: the slope of the chest equals and matches the backward slope of the other leg: the tail in harmony with the body, and those eyes fixed on a distant object, disdainful and proud, not bothering to look at the trapped reptile. "Bashaw" is telling a story: not just posing. 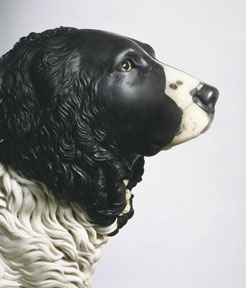 The snake is the thing. Because of the weight of the marble, Wyatt had to find some support for the tummy or "Bashaw" would have soon cracked, split in half. So a snake, writhing in anger and fear, one of the half-coils providing a fulcrum at the vital pressure point. Viola! A bronze boa-constrictor. Not all that common in England, mind you but ... Why not? Why not indeed. Think about it. And the subtitle to the sculpture; "The Faithful Friend of Man Trampling under foot his most Insidious Enemy". This is not one's everyday variety of English garter snake being trampled underfoot, but a most "insidious Enemy of Man." And who's that? Well, in Genesis III he was given the Word to crawl on his belly and to "bruise the heel" of man. Dog-god: a most faithful friend. If Adam only had a Newf in Eden then the apple business would have gone nowhere. The next best thing, given the Fall, is "Bashaw." And, most curious, the direct analogues: St. George and the Dragon: St. Michael and Serpent. It is "Bashaw's" right paw which holds the serpent, not needing or deigning to look down at his foe, but gaze fixed, slightly upwards, on the distance. Super Newf and super Snake. The Essene Brotherhood would be proud.

We shall return someday to see "Bashaw," that ever vigilant Landseer Newfoundland with a long history behind his creation: the coolness of marble masking the 12 love and quarrels and the vision of a well-loved dog.

MORE TO THE STORY...

"The Deliverer" - plate with a child, dog and snake

Captain Bailey was a serving officer in India. He owned a Newfoundland Dog whose name was said to be Bashaw. The name Bashaw interprets as "a nine tailed jack-in-office" from an unidentified old dictionary, or from the Collins New England Dictionary, 1965 "a haughty overbearing person."

The story goes that Captain Bailey and his dog were in the company of a Mahaarajah whose son was suddenly threatened by a large snake. The dog saved the boy by biting off the head of the snake thus earning the eternal gratitude of the Maharajah. He decided to commemorate the event by ordering a pair of porcelain figures showing the child being threatened and then saved. 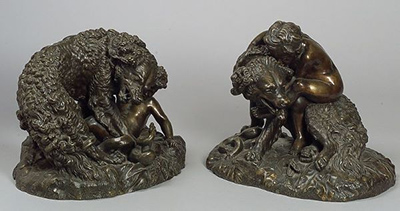 The plate, which would have been a sample plate would have travelled by horse and cart to the docks along unmade roads and thence to a sailing ship, eventually arriving in India. It would have then been taken by bullock cart and/or camel train to the Maharajah for his approval. The letter of approval would then have made the reverse journey before finally the finished work would arrive in India. Such was its quality and popularity that it was exhibited in the 1851 Exhibition. It was copied in earthenware, stone and bronze, like these bronzes by Auguste JeanBaptiste Lechesne done in 1853.

The drama of the story appealled to Victorian sensibilities with the child clinging to his brave rescuer, entitled "The Deliverer" so much they have even been captured on the tall gate posts at Harlaxton Manor in Lincolnshire. Seen here in front view, and again in detail of the left gatepost. 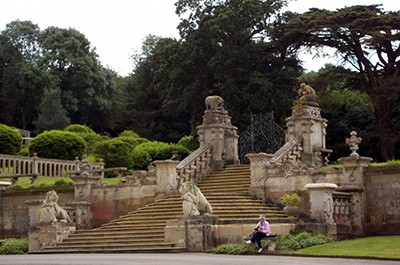 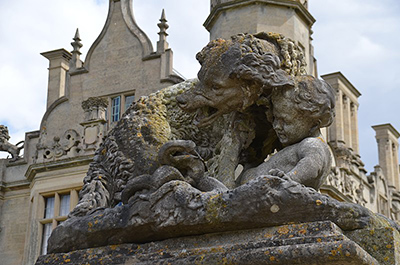 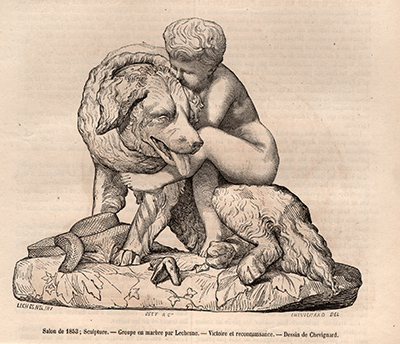 Bashaw at the Victoria & Albert Museum