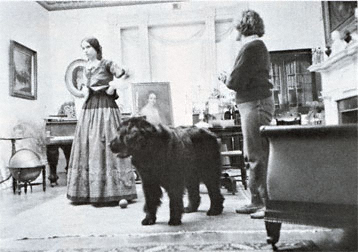 The American poet Emily Dickinson may have never visited upstate New York, however, that area will depict her home in a Public Broadcasting System show about her life and work.

The show is one part of a 13-part series called "Visions and Voices," focusing on the work of the American poets. The series, which will include Robert Frost, Walt Whitman, T.S. Eliot and Emily Dickinson, among others, is to be aired in the 1986 season. Here we see "Emily" (Actress Mary Lane), Bonny and myself getting set up for a drawing room scene - photo courtesy - NY Center for Visual History 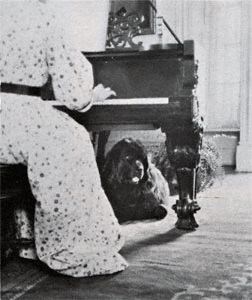 Approximately a decade of the poet's life was spent in a rather solitary style with her Newfoundland dog, Carlo. Aotea's Bonnavista Beauty, called Bonny and owned by Gillian McArthur, will play the part of Carlo in the hour long movie.
Actually, the reclusive poet never strayed far from her home in Amherst, Massachusetts. The producers, however, quickly realized that the modern-day Amherst had changed so much that the authenticity was lost. Even the old home was modernized on the advice of Brockport College theater design professor Richard Montgomery, the producers decided that Leroy, Caledonia and the outskirts of Rochester were the best setting for 19th century Amherst.

A male dog was first considered for the part of Carlo. However, since some of the shooting would take place in the Leroy Historical House, it was decided at the last minute that a female would be more suited near the brocades and antiques.
The day before the shooting, the director, Veronica Young, and her assistant came out to see if any of my Newfoundlands could play the part. When they were introduced to Bonny, they were pleased with her attitude and personality. I was told that she must be quiet on the set since there would be people, lights and camera action. I thought she would perform nicely because she is easy going and has been recently shown in competition. After a little basic obedience practice and grooming, we were all set to play the part of Carlo.
I was a little apprehensive at first, wondering if Bonny would obey hand signals and look enthusiastic about meeting a person whom she had never met. After the first day, it seemed that everything would be fine. Bonny performed well with Emily in front of the camera. Shots were taken in the drawing room, bedroom and library.
Probably the most difficult shot was to get Bonny to run out of the house, down the path to a horse and carriage where she was expected to greet Emily who had just returned from a long trip. We must have used a bag full of liver treats that day!
Getting the dog to stay under the piano while Emily was playing it was also tricky. This problem was solved by hiding me under the piano, where I occupied Bonny with another bag full of liver treats.
It was all an incredibly interesting three days. The crew spoiled Bonny with food and petting. How she will behave when her name appears in the credits, is open to debate! Since PBS is always on a low budget, there was little finance except for paying for gas expenses. Working with the crew on the movie was great fun. 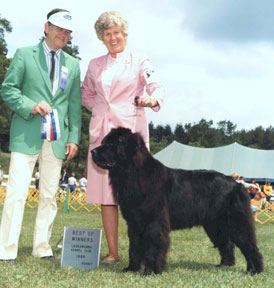 Bonny needs one more point to complete her championship. However, that may have to wait because puppies are expected in mid-September. She has been line bred to her grandsire, Ch. Tuckamore's Dutch of Pouch Cove. The film crew tells me that she is now their mascot and that her photo is hanging on the cutting room wall. They would like to be informed about her progress.
Be watching for Emily and Carlo in "Visions and Voices" sometime in '86.