by Mary Jane Spackman & Sue Miller from the 4Q 2003 Newf Tide
Throughout the history of our country Newfoundlands have always played a role in the challenges we have faced, from the revolutionary war through 9/11. The following is a memory of how one Newfoundland served with our soldiers in WWII.

Over 30,000 dogs have served in the U.S. Military, but it wasn't until they established DFD, (Dogs for Defense) in 1942 that more dogs became part of our armed services. At first dogs were used as sentries, however problems arose as the trained dogs outnumbered the trained handlers. I t was then decided to use the dogs as search and rescue sled dogs, roving patrols and for messenger services, in addition to serving as companions for the soldiers. 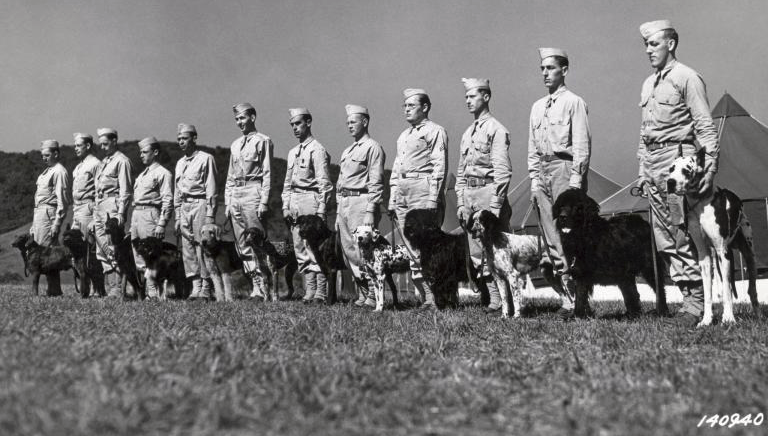 The first training centers for dogs were established in Front Royal, Virginia, Camp Rimini, Montana, Fort Robinson, Nebraska and San Carlos, California. The following year an additional center was established at Cat Island off the coast of Mississippi. This photo shows soldiers presenting dogs for induction into the U.S. Army in 1942 in Front Royal, Virginia. After Pearl Harbor, Americans were encouraged to donate their dogs to the Army. Dogs sent from all 48 states were trained for patrol, sentry duty, mine detection, and as messengers. (photo courtesy National Geographic)

Camp Rimini is where the few Newfoundlands that served our country were trained. They were trained as sled and pack dogs. These dogs were destined for Newfoundland, Greenland and Iceland. At first 32 varieties of purebred dogs and crosses were accepted into the program. Within a few months it was shortened to 18 purebreds. Late in 1944 it was again shortened to seven breeds.

Our breed did serve during World War I I and the following is a memory from Sgt. Major Hank Comerer, who is the father of one of our NCA members, Linda Kenavey.
"During World War II thousands of airplanes, mostly 1317 and B-24 bombers, flew to airfields in England. Between Presque Isle Maine and their destinations the United States, Army Air Corps maintained bases in Northeastern Canada, Newfoundland, Labrador, Iceland and Greenland. Their primary mission was to support transient aircraft with weather information and keep landing strips open at all times for emergency landing's ... even in a blizzard at 50 below!

A vital part of each base was the Search & Rescue Unit. Every dog had his own Serial Number and Service Record, the same as the men. These soldiers trained constantly, in weather conditions that immobilized everyone else! When a plane went down, or a crew parachuted, they had to be located in a vast wilderness and brought in .. every man, every time.

The head of our Search & Rescue Unit at Mingan, Canada was Sgt. James Laughey who lived in Baudette, Minnesota, the Lake of the Woods country on the Canadian border. Jim spoke several Indian dialects, plus he certainly knew how to speak "dog language." I'm still convinced that the dogs understood every word that Jim or his men said.

Their barracks and kennels were located at our transmitter, the other end of the Base. We had three sled dog teams of Huskies, plus eight pack dogs: Newfoundlands, Siberians and St. Bernards. Those pack dogs could carry an unbelievable amount of weight ... and go all day! The performance of this unit was so excellent that they earned a Presidential Citation.

In a top secret operation, this unit was flown to participate in the Battle of The Bulge-nothing else could move in the snowstorm. After completing their supply and rescue mission, they were quietly returned to our base. Only a few top commanders ever knew it happened!

When Jim came in to Headquarters he would sometimes bring his favorite Newfoundland. After a few visits he would just open the front door and say, "go see Hank." The Newf would lumber down the hall, hit the office door, pass several desks, make a right turn to my desk, sit and put his big paw on top ... as if he belonged there!

One time a U.S.O. troupe of girls on their way to Europe came to our base for a performance. They were standing at the Colonel's desk, about ten feet to the right of mine. Suddenly the door banged open, and this big black "bear" bounded into the room, heading in our direction. The visitors dove behind the Colonel's desk ... who was just as surprised because he was never there when the Newf came in. Jim stood there laughing while his dog ambled over to see Hank.

Very little has been said about the importance of dogs in the over-all history of World War II. Maybe that's the way it should be. But for those of us who were in it with them, the dogs of Search & Rescue units earned our life-long love and respect."

Recollections of a Camp Rimini Trainer