Gautier surveyed art in 1855, His comments about Landseer's work reflect great knowledge and tolerance of the artist.

"Landseer gives his beloved animals soul, thought, poetry, and passion, He endows them with an intellectual life almost like our own; he would, if he dared, take away their instinct and accord them free will; what worries him is not anatomical exactitude, complicated joints, the thickness of the paint, masterful brushwork: it is the very spirit of the beast, and in this respect there is no painter to match him; he penetrates the secret of these dark brains, he knows what makes these unconscious little hearts beat, and reads in these dreamy eyes the faint astonishment produced there by the spectacle of things. Of what does the hunting dog dream near the hearth, the sheep ruminating on its bent knees, the stag raising to the sky its black and glossy muzzle from which drip strands of saliva? Landseer will tell you in four strokes of his brush. He is on intimate terms with beasts: the dog, giving him a shake of the paw like a comrade, tells him the news of the kennel; the sheep, blinking its pale eyes, bleats out its innocent complaints to him; the stag, which, like a woman, has the gift of tears, comes to weep on his breast over the cruelty of man, and the artist consoles them as best he can, for he loves them with a deep tenderness and does not have a fool's disdainful scorn for their afflictions." 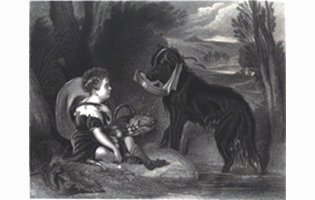 Detail out of Horses and Dogs with a Carrot
Dated 1827 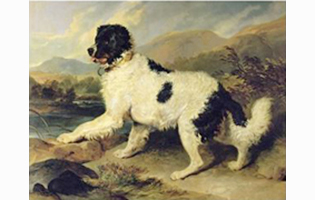 Dated 1824 (oil on canvas), The dog was painted in 1824 but Edwin requested the inclusion of the mountainous background, later done after his first trip to the Scottish Highlands. This dog belonged to William H. de Merle.

Dated 1822 An illustration for the Scottish narative poem by Robert Burns shows the white and black Newfoundlnad Caesar belonging to Mr. Gosling and Luath, a smooth-coated working Collie, who was Borns' favorite dog. A hand-tinted engraving by Chas. A. Lewis published in 1889. 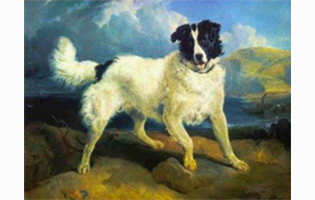 Dated 1824. Full portrait of Mr. Gosling's Neptune in a landscape overlooking a lake.

Perhaps affirming the heroic nature of the dog, the painting is framed with timbers from the famous HMS Temeraire, a battleship that fought at the Battle of Trafalgar in 1805.

Bashaw or Off to the Rescue

Dated 1827 Landseer’s growing reputation attrached the Earl of Dudley and Edwin was invited to portray Bashaw. The work was engraved in 1858 by Thomas Landseer and titled “Off to the Rescue”. Landseer hints at the life saving abilities of the dog by showing him at the seashore, on the verge of leaping into action. The huge scale of the work and the beautiful pose showing full movement and feeling create a breathtaking sight. The 1st Earl of Dudley was so fond of Bashaw, he also commissioned Matthew Cote Wyatt to do an elaborate and expensive multi-colored marble statue of him trampling a snake. This statue is displayed in the Victoria and Albert museum. 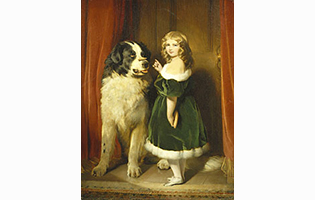 Dated 1839 The young Queen Victoria got impressed by the work of Landseer. She was and avid dog fancier who had 75 dogs at any given time during her reign. She commissioned Edwin to paint portrais of many of them. Here we see Princess Mary (the late Duchess of Teck) as a child – the younger sister of Prince George with her favourite Newfoundland dog, Nelson, balancing a biscuit on his nose. Engraved by Thomas Landseer. The Duchess of Teck was to become the mother of Queen Mary who was the grandmother of the present queen Elizabeth READ MORE 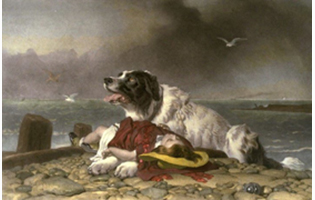 In 1856 the Royal Academy exhibited “Saved” This painting is beautifully composed and once it was engraved by Samual Cousins in 1859 it became as popular as “A Distinguished Member” Based on the fame of Milo, a Newfoundland living with the keeper of the Egg Rock Lighthouse in Nahant, George B. Taylor. In foggy weather Milo served as a kind of fog signal, barking at vessels as they approached Egg Rock. Taylor claimed his dog was as useful as the light. Milo was credited with the rescue of several children from drowning around the island. His fame spread across the Atlantic. Landseer, painted Milo’s portrait, depicting a small child nestled between the dog's enormous paws. The model for the child was Keeper Taylor's young son, Fred. Read More. This painting was engraved under four different titles and various sizes by Currier & Ives, New York.