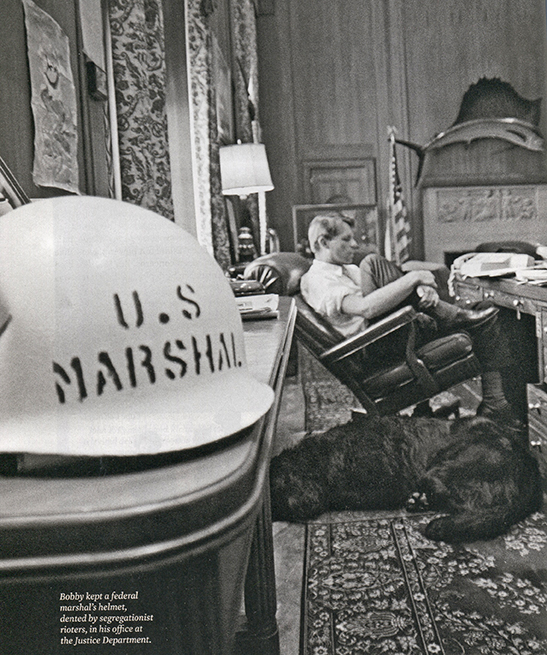 Robert Kennedy was an animal lover, with a collection of pets, primarily dogs. Of this menagerie, his well-known favorite was a Newfoundland Dog named Brumus from Little Bear kennels, who was his devoted companion, often accompanying him to his office while he served as Attorney General in his brother's administration. Seen here in a pose familiar to many Newfoundland owners, Brumus curls up next to his master's chair, keeping him company during his long hours at work.

“The most notorious (of Kennedy’s pets) was Brumus, the malodorous Newfoundland, who peed once on Senator Harry Byrd’s spaniel and twice on two ladies picnicking at Hickory Hill, and who got his name and mug shot on the lyric sheet of the Jefferson Airplane’s Crown of Creation album.”  - Bobby Kennedy - The Making of a Liberal Icon, Larry Tye

"The doors to RFK's office was often open, and the staff felt free to drop in. The walls of his office were covered with his children's drawings, and his oversized, undersupervised Newfoundland dog, Brumus, annoyed visitors." - Robert F. Kennedy, His Life and Legacy, Time

"When Bobby brought to work his beloved Brumus, the black Newfoundland who was the size of a pony and could drool at will, he let nature call in the courtyard and trusted the guards would clean up after him." -Bobby Kennedy - The Making of a Liberal Icon, Larry Tye

On January 10, 1964 Burmus was involved in a rear-end collision in the Kennedy limosine on the way to the Justice Dpeartment with his master, her and Bobby were unhurt - check out the story from the Times

"Taped on the walnut paneling were brightly colored drawings done by Bobby and Ethel's children. There was a dartboard on the wall, a football on the desk. And, more often than not, there was Brumus - a huge, ill-tempered Newfoundland who nipped at visitors, stole food, raised his leg on the furniture, drooled on staff. Bobby adored him. If the dog was left at Hickory Hill, he whined at the front door until his master returned. Bobby couldn't bear the idea of Brumus spending a long, unhappy day at home, so every morning, the attorney general and his shaggy sidekick climbed into a chauffer-driven Cadilac and set off for work. Bobby found the limosine a little embarrassing, but the ride gave him a few uninterrupted minutes to go through paperwork - - and besides, Bumus liked it." - - Robert Kennedy, His Life, Judie Mills

RFK and His Times