Purchased for $20 in 1803, Seaman was a loyal and devoted member of the Corps of Discovery. From the journals of Meriwether Lewis:

" a bear came within thirty yards of our camp last night and eat up about thirty weight of buffaloe suit which was hanging on a pole, my dog seems to be in a constant state of alarm with these bears and keeps barking all night" – June 27, 1805

Some were curious "last night we were all allarmed by a large buffaloe bull, when he came near the tent, my dog saved us by causing him to change his course" – May 29, 1805

And other guests desired to travel with the Corps " walking on shore this evening I met with a buffaloe calf which attached itself to me and continued to follow close at my heels untill I embarked and left it. It appeared allarmed at my dog which was probably the cause of it’s so readily attaching itself to me" – April 22, 1805 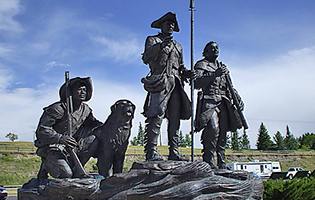 Seaman on the Lewis & Clark Trail 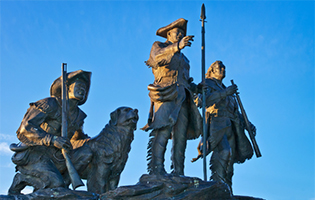 Newfie News on the Trail 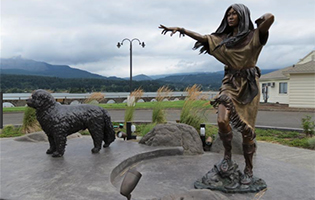 Inside the corps of discovery

The Dog Who Explored The West

Lewis and Clark and Me

The Saga of Seaman